Our country was built upon freedom and liberty, our law upon trust and justice, our people upon love and kindness, and our government upon people. So why is it without freedom and trust, justice or love, or even people? Our nation is politically divided, our people oppressed and without trust, and our law no longer with justice.

I’ve met officers of the law — they are kind people within. However, life happens, and unfortunately, they use their job as a therapy session. The media is ruthless to respond. A perfect reflection upon our world. That’s why those who are attacked need to be better than perfect, flawless. Officers of the law need to separate their jobs from their lives and become unbiased towards people. That way others wouldn’t feel oppressed and there would no longer be tension within our Country built upon freedom and liberty.

The media portrays what is going on in communities and as well with law enforcement. Law enforcement officers are supposed to help citizens feel safe in our communities, but instead we fear them. Many thoughts occur through people’s heads when getting stopped by law enforcements: “Will today be my last day?”, “Does my hair comb look like a weapon?” People should not have to fear the men and women who should be protecting us. Not everyone is a criminal, so why are we treating everyone like they are. Is it because their skin color is different? Systematically oppressing people is why we are in fear. To all law enforcement officers out there, you are an inspiration to many people, especially young ones, so please set a good example.

Having friends and relatives in law enforcement, my perspective comes from knowing their experience first-hand. Teaching is very similar. Where I have taught, the (Sheriff resource) officers that I have known have had a powerful and positive relationship with students and have served as mentors and even stand-in parents to help guide young people to make good decisions.

When I hear negative and derogatory comments focused towards police officers, I am VERY upset. Certainly, there are those, as in every profession, that have abused their positions, but for the most part, I have cringed as I have seen officers take excessive abuse, and I wonder how they are able to maintain such composure. I hope that society can actually have a meaningful conversation, instead of just talking about having a conversion, and come to an understanding of just how difficult it is to be a police officer and how stressful it is to endure constant negativity and personal danger when trying to do a job that is meant to help the public live a safe and productive life.

Smiling Senior Senior Camille Herren walks across the field to celebrate girls soccer Senior Night on Jan. 27 against South Plantation. She was greeted by her family, with them cheering her on as she walked over to take a picture with Principal Hudson Thomas and Coach Fredys Aguilar.

Surrounded in Support Nikita Legakis runs through the tunnel made by the boys and girls soccer teams as she celebrates with her team and family during Senior Night. Legakis has been on the varsity team for one year.

Setting the Kick Senior Elizabeth Ryan launches a free kick to restart play after a foul. Ryan ended up passing the ball to another teammate and they kicked the ball to the goal but was stopped by the goalie.

Face Off Seniors Camille Herren (11), Allison Cunneen (9), and Elizabeth Ryan (13) are running the ball down the field to score a goal, during a home game against South Plantation. They ended up not getting the goal, but continued to keep the ball on the other team’s side. The Tornadoes lost 1-0.

Keep it in Senior Lily Monaghan runs to keep the ball inside the field before the other team gets it on Jan. 27 against South Plantation High School. Monaghan kept the ball inside the lines and passed it to teammate Allison Cunneen who attempted to make a goal but was blocked by the goalie.

Diving for the Ball Sophomore Bianca Filippone goes diving for the ball during the rained-out game against Coral Springs High School,on Jan. 23. The game started off with a light sprinkle, but quickly turned into a heavy storm. The game was canceled due to dangerous conditions on the wet, slippery field.

Staff Sgt. David Beaulieu salutes the unknown soldier during the unearthing of the tomb. JROTC held its Fallen Heroes Ceremony on Nov. 7.

Lt. Col. Colin Beadle walks past the flags representing lives lost in wars since 9/11 during the Fallen Heroes Ceremony on Thursday, Nov. 7.

JROTC instructor Lt. Col. Johnson walks away from the podium after making an announcement. JROTC held its annual Fallen Heroes Ceremony on Nov. 7.

Major Christian Juman holds up a gun during the burning of the U. S. flag during the Fallen Heroes Ceremony on Nov. 7.

Adelle Barsky-Moore and Isabel Disla from Northeast High School walk around the courtyard while decked out in their pride attire. The Gay-Straight Alliance hosted a summit for similar organizations in the district on Friday, Nov. 1.

Sophomore Elurra Siggins from South Broward High School smiles while showing her pansexual pride. The Gay-Straight Alliance hosted a summit for similar organizations in the district on Friday, Nov. 1.

Senior Alphonse Engels listens to an announcement while wearing a transgender pride flag as a cape. The Gay-Straight Alliance hosted a summit for similar organizations in the district on Friday, Nov. 1.

Ellen Paglino, Ashley Prior, Emily Tetreault and Elliot Ortiz from South Broward High School pose in front of the library before heading into a lecture on sexual health.The Gay-Straight Alliance hosted a summit for similar organizations in the district on Friday, Nov. 1.

Senior Taylor Graham and junior Amber Diaz pose after a day of working for the summit. The Gay-Straight Alliance hosted a summit for similar organizations in the district on Friday, Nov. 1.

Arias performs the Cup Song from “Pitch Perfect.” Each contestant recreated an iconic scene from a movie.

Juniors Tori Baldeo and Shariah Curton grin while hugging each other. They are both dressed as bikers.

Senior Christian Santiago gives a slight nod while dressed as a biker.

A group of intimidating bikers pose outside the art room.

3. Ismail Mumtaz and Jean Cledet pose as a powerful tennis cinema duo. They were kitted out with the outfit and gear.

4. Seniors Cristian Juman and Victoria Santa Lucia pose for a picture. They dressed as Mario and Luigi.

Listen to your elders!

The beauty of nature

Nature is the phenomena of the natural, physical or material universe. Daniel Guo is looking at the nature around him and appreciating every moment of it. Photo by Simon Ho

Jump into the Spring Crossword

PBHS welcomes 20 staff members and 61 students from all parts of the world. They will be here from Jan. 22 to Jan. 26. Graphic by Nicolas Gallardo

Go behind the scenes as drama students prepared for their December show.

Here is the Vol .8 No.1 Back Page by Christina Matiuk

Be Scared, Be Very Scared

Here is the Vol.8 No.1 Front Page by Nicolas Gallardo

The baseball team wins the regional semifinal against Somerset on May 3, 5-1. The boys defeated Somerset three times this season, including a 12-5 victory for the district championship. The boys (20-8) will play in the regional final next Tuesday, May 10. “The other team was talking a lot of smack, but it was a good game!” senior second baseman Bobby Aseere said..

Pompano Beach student nominated for ‘Best of the Best’ award

Senior Rebekah Garretson was awarded one of the top three pictures in the Nature Photo category of the Florida Scholastic Press Association (FSPA) Spring Digital competition. The above photo, taken by Garretson, was announced to be an “All Florida” quality photo and is a finalist for the “Best of the Best” award in her category of the spring digital contest.

Cars for a cause: Pompano hosts car show

As part of the support for The International Children’s Surgical Foundation and Purple Pinkies for Polio, Pompano Beach High School hosted a car show on Feb. 26. Student’s family and friends were encouraged to come out, enjoy music and food, as well as support the causes.

A few of the cars that parked at the car show are shown above. Car entry fee money went to the charities, while entrance was free for spectators.

Junior Angelo Mainolfi brings his car to participate in the car show.

Sophomore Sarah Gurdis, number 2, sets up to shoot a goal in the Feb. 23 match against Westminster Academy. Water polo is a new sport this year at the school.

Assistant principal Mr. King poses with two of the actresses in the play, junior Stephanie Freeborn and senior Camila Alvarez before the show.

Exchange of culture: Chinese and American

Four of the girls who participated in Chongquing Fudan Secondary School’s trip to New York and South Florida learn about the differences in American and Chinese culture. Both PBHS students and students from China expressed their surprises and what they were excited to learn about in each others cultures.

Sunny steps into the Sunshine State

Senior Rebekah Garretson poses with her shadow, Cheng Zi Yao, also known as “Sunny,” from Fudan High School in Chongqing, China. Sunny was one of 12 students visiting from China for the week of Feb. 1-4. 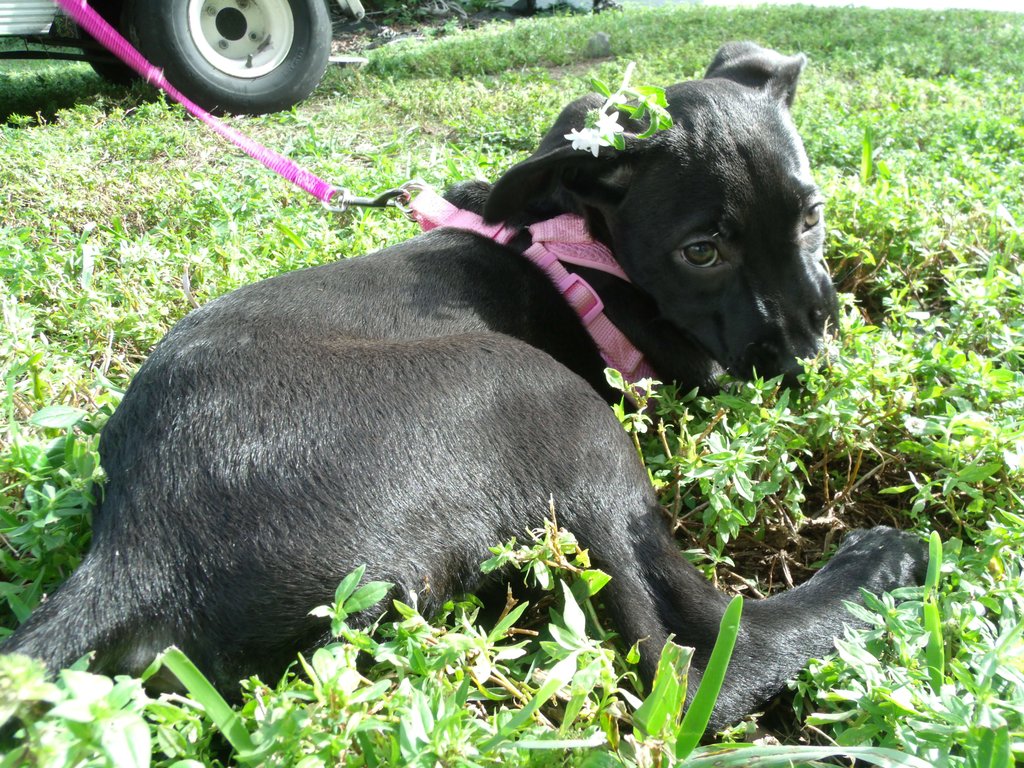 Although Phantom found his forever home, Ms. Fish is still fostering Melody. Melody and her brother Jasper will continue to visit PBHS with Ms. Fish twice a week. 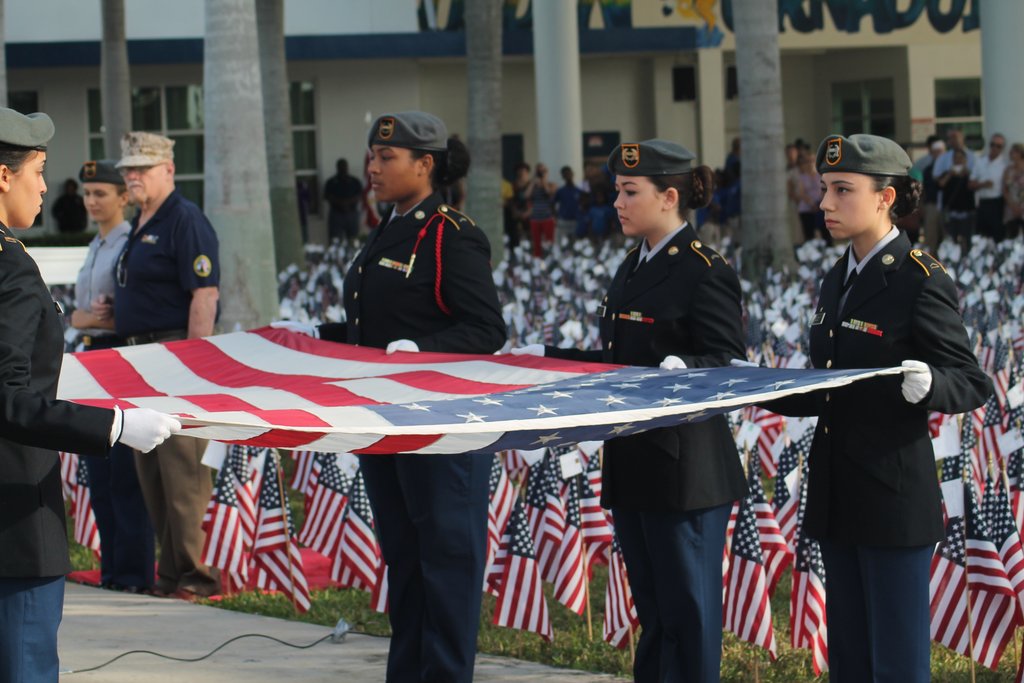 Senior Michelle Velez and juniors Chelsea Keeton and Renee Innocent participate in the JROTC Veterans Day ceremony by holding the flag and waiting for it to be cut. JROTC invited numerous veterans from around Broward County to attend the ceremony on Nov. 10. 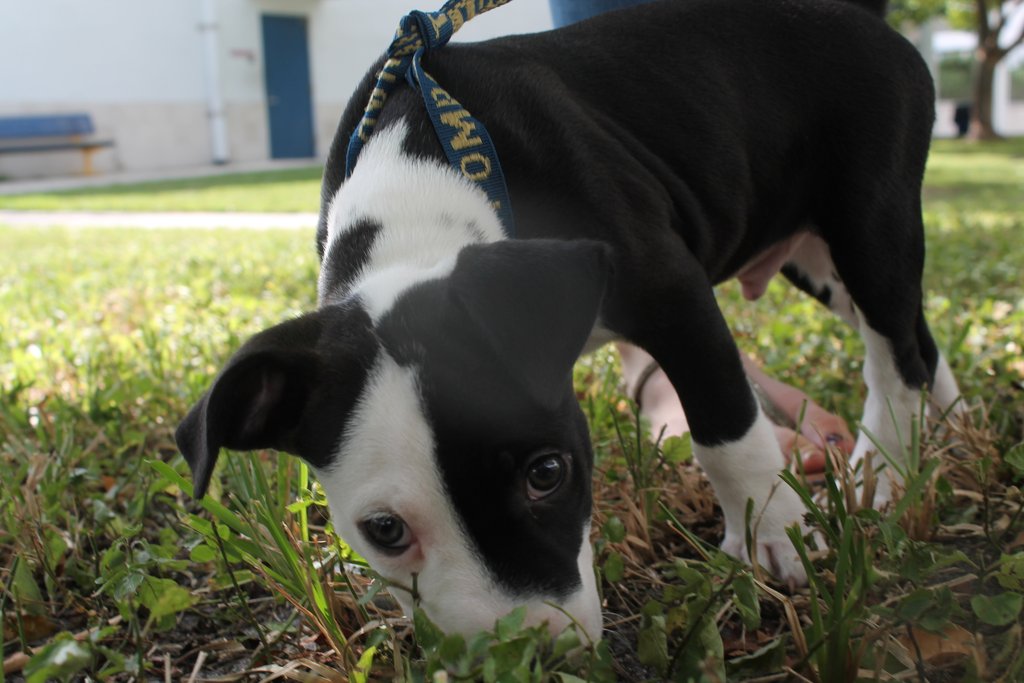 Phantom, an American Staffordshire Terrier mix puppy, is being fostered by guidance counselor Ms. Fish, along with his siblings Melody and Jasper, in an effort to find their “forever homes.” Ms. Fish originally brought all three dogs to school, but she only brings one at time now due to the size of each dog. She brings the dogs approximately twice a week so that they can become accustomed to human interaction. She is fostering the dogs through Little Paws of Love, a nonprofit organization.

From the October 2015 issue of the Tornado Times.

Tornado Trick-or-Treat Mad Libs. Graphic by Reese McFarlane and Rebekah Garretson. Don’t forget to share your creations with us!

From the October 2015 issue of the Tornado Times.